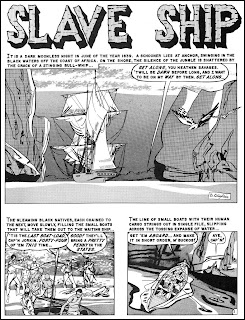 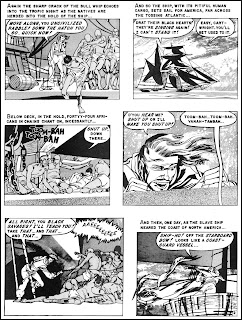 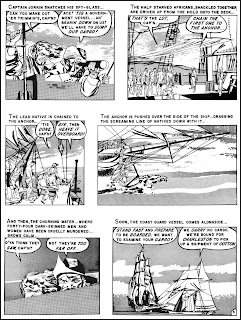 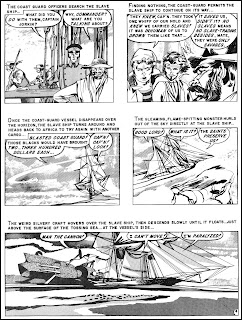 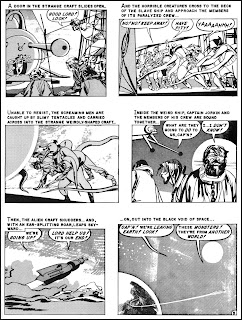 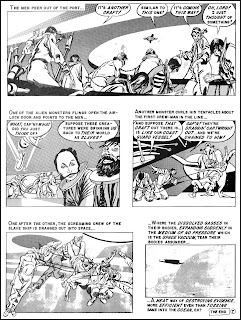 Posted by Sequential Arts Confidential at 3:52 AM No comments: 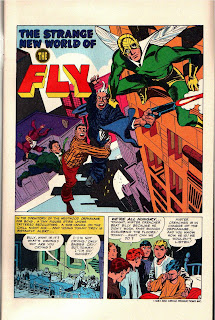 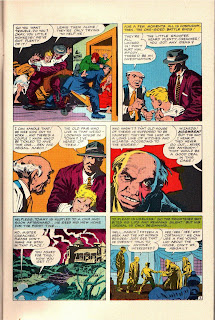 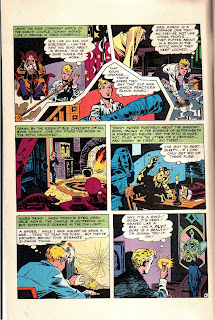 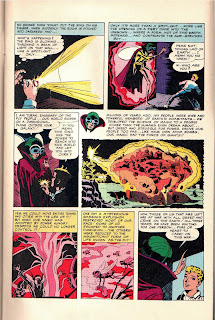 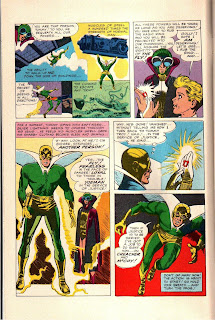 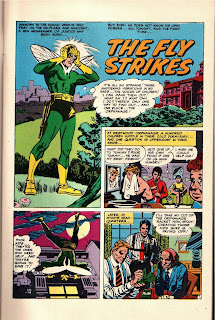 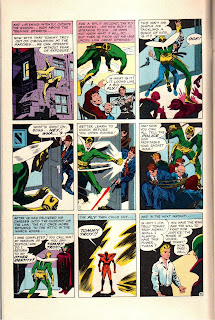 Posted by Sequential Arts Confidential at 3:44 AM No comments:

Email ThisBlogThis!Share to TwitterShare to FacebookShare to Pinterest
Labels: jack kirby, the fly

From the Dynamite Entertainment press release:

"Dynamite Entertainment is pleased to reintroduce readers to the scourge of the undead: VAMPIRELLA, and she is all that stands between us and the end of the world! Vampi’s back and hot on the corpse-strewn trail of her nemesis, Vlad Dracula. It’s a darker world for Vampirella, and something more sinister than vampires lurks in the shadows, something even Dracula himself has cause to fear… Written by Eric Trautmann (THE SHIELD, ACTION COMICS) and illustrated by Wagner Reis (PROJECT SUPERPOWERS). AS A BONUS FEATURE – A rare story by Jeph Loeb and Tim Sale!"

That being said, we've got to admit we were put off by the cover, with the awkwardly drawn Vampi, who appears to have a broken right leg! 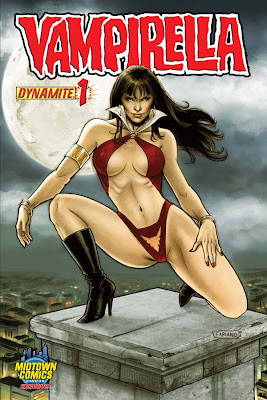 If you're going to be inspired by a Frazetta pic, at least do it justice! 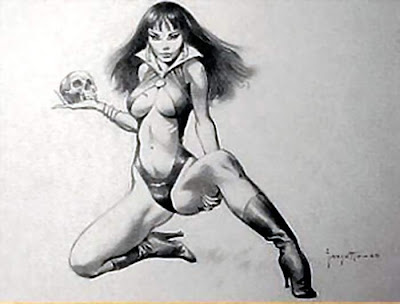 Got to admit we're looking forward to the bonus feature by Loeb and Sale, though!
Posted by Sequential Arts Confidential at 2:19 PM No comments: 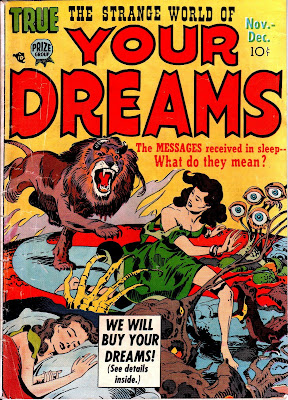 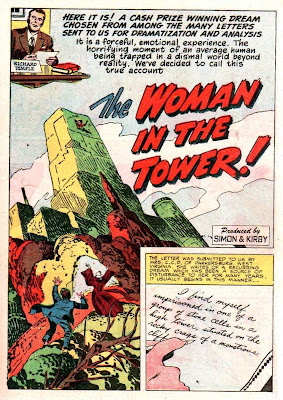 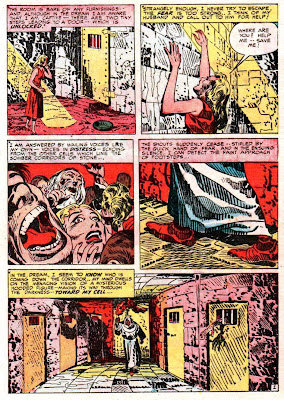 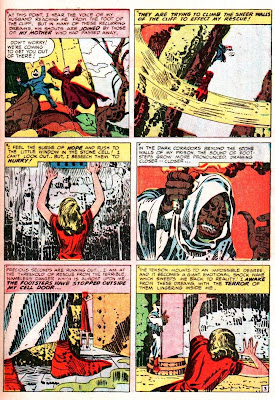 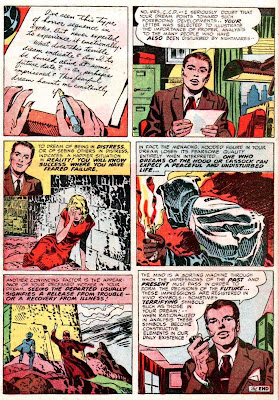 Posted by Sequential Arts Confidential at 12:49 PM No comments:

In 1952, Frank Frazetta started working with Al Capp on his Li'l Abner strip. At this time, Frazetta was also doing his own strip, Johnny Comet, as well as assisting Dan Barry on the Flash Gordon daily strip.

Frazetta returned to comic books in 1961, after 9 years with Capp,  We present a great example of Frazetta's work on the Li'l Abner strip - and with a dinosaur too! :) 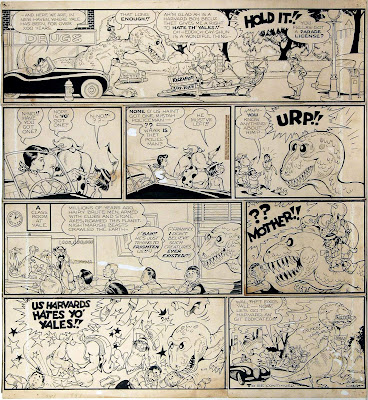 Posted by Sequential Arts Confidential at 12:28 PM No comments:

Put together vicious gangsters, hot witches, determined lawmen and vengeful spirits and you have the new indie comic: CURSE OF THE VESSEL, which has been available since November 1st at Dimestore Bistro.

"Curse of the Vessel" is a finalist in this year's Small Press Idol contest (similar to TV's American Idol, only for comic books)!  Vessel has boasting rights to having the most fan votes ever in Small Press Idol history, beating out their competition by over 70 votes!  And now Vessel is one of the final four (out of over 50 entries) vying for a cash prize, a publishing deal and an action toy of their lead character, Vincent Faustino!

What is Curse of the Vessel about?
(From their pitch to Small Press Idol):

Vincent Faustino has become an involuntary vessel for the dead.

They use his body to take care of unfinished business, exact revenge, and to right the wrongs that plagued them in life. He wakes up in places unfamiliar to him, confused and alone, with only momentary flashes of what he has done.

It was not always this way. Vincent was once an enforcer for the New York mob. He had it all, money, fast cars and faster women. That is, until the day he was sent to kill the wrong person. An elderly shop owner named Zicari, who wasn't what he seemed. It turns out that he was a dreadfully powerful Warlock with a terrifying sense of humor. He turned the tables on Vincent and branded him with a sigil, a powerful mystical symbol that allows the souls of those who have died at the hands of evil men to use his body as they will.

Now Vincent is on the run from his deadly former associates and law enforcement for murders and events he has no memory of. The spirits follow him wherever he goes. He tries to hide in dirty motels and abandoned buildings. With the help of a 22-year-old witch named Marina, he tries to break the curse and track down Zicari. Along the way, Vincent has no choice but to help the dead finish their tasks, both good and evil.

This is the torture he must endure. This is the punishment for his evil past. Vincent Faustino is forever "The Vessel"

Who Are the Creators?
The team behind this fascinating comic are creator and writer Michael Leal, pencil artist Danny Kelly, ink artist Nik Poliwko and colour artist Michael McElveen. 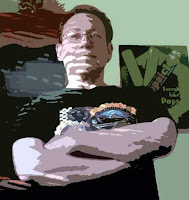 We spoke with Nik Poliwko.  Nik is a Winnipeg-based comics artist who has published work with a number of indie companies, including A.C. Comics, Vortex, Catfish Comics and Revisionary Press.  Along with handling the inking chores on "Curse of the Vessel", Nik is also providing the pencils and inks for 3 new comic series!  He has been described as “the busiest guy no one has heard of!”

How did you get involved with Curse of the Vessel?

I had just joined Facebook and had stumbled across some artwork by [Vessel pencil artist] Danny Kelly.  I was really taken by his work and in the back of my mind entertained the thought of working with him on something one day.  When Danny uploaded a pencil drawing of the Phantom, one of my favourite characters, I couldn't resist taking the opportunity to ink it.

Unknown to me, Danny was already working with Michael Leal on Vessel, and they had just lost their inker/colorist!  I believe Michael then contacted me and asked if I would be interested in joining the team as inker.  I checked out what they were doing, and I was thrilled not only to be working with Danny, but also to be part of such a great concept for a book!

What's the process for the work to be produced?

It's pretty straightforward: Danny pencils up the pages, scans them and emails them to me.  I print them out on 8.5 x 11 sheets and use a lightbox to ink them.  I then scan the inks, add the black areas in Photoshop and then email the pages to Michael McElveen for his amazing colouring, which end up back in Michael Leal's hands for lettering, which is done by his wife, Michelle.

How do you find working with this team?

Couldn't be better!  Everyone has been very professional, and extremely dedicated to providing the highest quality product possible!

How did you ever get labeled "the busiest guy no one's heard of"?

Haha!  Because I seem to be involved in so many things, a friend of mine referred to me that way on Facebook, and it kind of stuck! 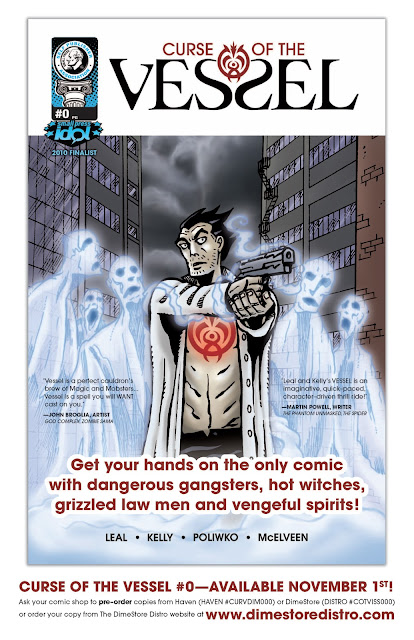 Where Can You Find Out More?
As previously mentioned, "Curse of the Vessel" is in the final round of Small Press Idol.  The only way they can win the contest is with sales of their comic!  You can help make their dreams a reality by making a purchase!  You can buy a copy of this great comic at the reduced price of $3.50 at Dimestore Bistro.

Here's a cool "Curse of the Vessel" trailer produced by Nik Poliwko:

Find out more about Vessel, the creators and how things are progressing at the "Curse of the Vessel" fan page on Facebook and the Vessel Blog.

For more work by the creators of "Curse of the Vessel", here's the links:

ARMY MOTORS COVER by Will Eisner

March 1945 cover of Army Motors # 12, featuring "Joe Dope".  Eisner drew a series of posters for the army featuring Joe before he got his own 2-page strip in Army Motors in 1944. 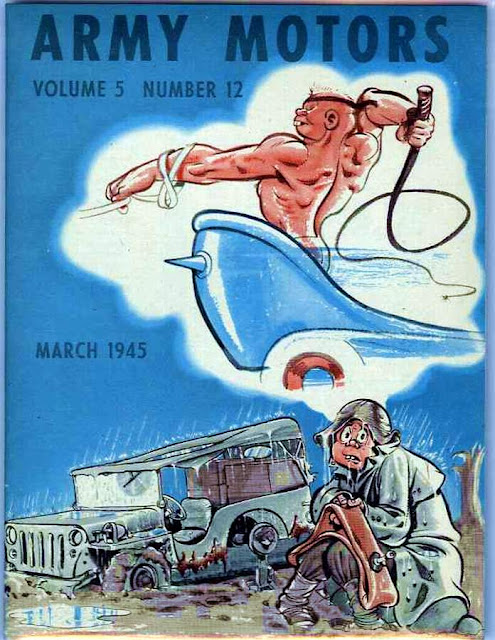 Posted by Sequential Arts Confidential at 9:00 AM No comments:

Got a comic you want to promote, or an article about comics you'd like to contribute to this blog, or additional info or correction to one of our posts? Contact us at:

Our aim is to present a unique blend of the old and new, of the unusual and the obscure and to share our views on some of the finest comic artwork and writing out there!

Thanks for taking the time to see what we're all about and we hope you'll hang in there and look in periodically -- or better yet, "follow" us now!